As anyone can probably tell, I am an animal lover. I have way too many dogs, and one cat. And it’s the best! Every person knows that if I got into a relationship and had to chose between my animals or the other person, I’d chose my animals every day. Axl and Buddy are my two babies. I don’t want to say my favorites because I feel guilty. But it’s like every mom out there when she says, “I love you both the same.” We all know she doesn’t! We know she has a favorite!

Buddy came into my life two years ago. I get the kill lists for shelters and there was a video of him in his kennel trembling. The volunteers were trying their best to get him to come take a treat from them, but he wouldn’t move. And he was paralyzed. My heart broke. I immediately told the rescue I’d foster him. And the rest is history. He is a lot of work, but he’s worth it all. I have to empty his bladder every few hours and there is pretty much constant cleaning. I wouldn’t trade any of it if it meant he wasn’t in my life.

I cannot describe Buddy adequately. You just have to meet him. He has a perma smile and even though he only has the use of two legs, he hops around so excited to meet every person that we encounter. He does have a wheel chair but actually moves better without it. And he’s so fast! If he gets out of the gate, he’s really hard to catch! And because I have such horrible disciplinary skills, he doesn’t listen. At all. But he’s so incredibly good he really doesn’t need much discipline. When I first began fostering him I noticed very quickly that he loves to spoon with me at night. Like just melts perfectly into me. He’ll sleep like that until I turn away. It’s one of the many reasons I love him. It’s just a special bond between us. I call him my soul mate actually. I really feel that there is a beautiful spirit in him. And we are connected. If you ask my sister which dog is her favorite (and we have 7 between the two houses) Sheena always will tell you it’s Buddy. My cousin’s’ twins come over and just want to love on Buddy. So I definitely know that I am not the only one to feel how incredibly special he is.

Buddy travels with me back and forth. He Is easy, just lays in my lap, waiting for the sound of the foil that holds the pretzels. He doesn’t make a peep. We’ve had a couple of accidents at the airport and on the plane, but now I think I’ve learned how to make sure we get everything out before we leave and don’t have to use the barf bags. I was travelling with him one weekend and I set him down in the waiting area. He went nuts! He ran up to the first person sitting, who was happy to pet him, then he went over to the next person. Every person he said hello to lit up and were more than happy to give him love. There were smiles all around. And he got more love than he even knew what to do with. When I have him in his wheel chair it’s the same thing as he cruises along. People smile. The coo. They ask questions and make comments. He makes everybody’s day better.

Last weekend at the airport we were siting waiting to board our flight. A lady was standing next to us and asked me if she could pet him. I was like “Please! He’s dying to be given attention from everyone!” She began loving on him and he, in his normal spirit, hopped around and gave her lots of kisses. I could see she was starting to well up with tears

“Thank you. This has been the best thing to happen to me today and he actually brought a little light into my life. My aunt just passed away so I’m on my way home to be with my family. This just gave me a little happiness.” That almost made me cry as well.

Buddy literally is the happiest thing on earth. He probably should live at Disneyland. But he’s stuck with me! Every day I just smile with him and think if a dog that only has use of two legs can do all of this and be this happy? I should be too. I have just learned so much from Buddy. I want to be that kind of person. The type where people just smile and light up when you’re around them. This world would be better if we all took Buddy’s lead and really just loved and were excited by each person we met. I think that’s an excellent challenge. Be the light in someone’s dark day. Be that one person they need. Even if they don’t ask.  But I don’t suggest you just lick everyone like Buddy does. That would be awkward! 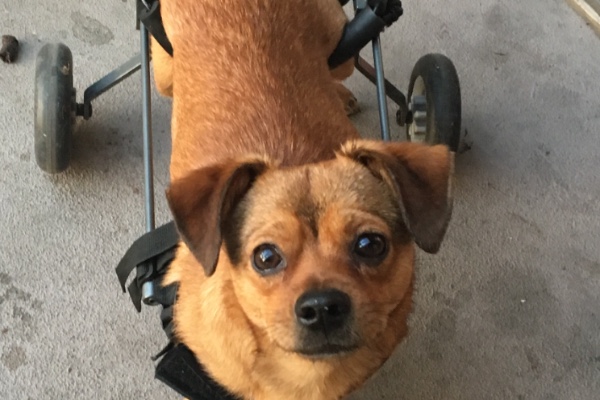